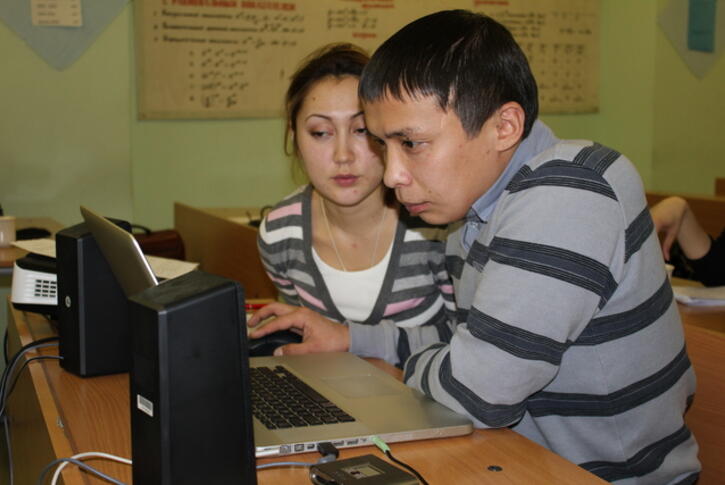 The implementation of the joint Russian-Norwegian-Canadian project "Vyngy syo" (in Nenets "Voice of the tundra") aimed to organize broadcasting on Nenets language is going on in the Nenets Autonomous Okrug.

The project "Voice of the tundra" was initiated three years ago by the Working Group of Indigenous People of the Barents Euro-Arctic Region. However, the practical implementation of the project started only in September 2012. The project aims to create a permanent broadcasting on Nenets and Russian languages to disseminate reliable, topical and important information for Nenets population living primarily in rural areas of the Nenets Autonomous Okrug and leading traditional way of life. The Nenets broadcasting company (hereafter NBC) is a main Russian partner in the project. The Norwegian side is represented by the Norwegian Barents Secretariat and NRK Sápmi (Sami branch of the Norwegian Broadcasting Corporation), and Canada is represented by the Indigenous Media Institute.

So, 11 young indigenous participants were selected for the project last September. They are from five localities of the Okrug: Naryan-Mar, Krasnoe, Nes, Nel’min-Nos, Bugrino. But it was not easy to do, because one of the main criteria was knowledge of Nenets language which most part of indigenous youth knows badly. Most of selected participants understood Nenets and were able to read and write on it, but did not speak fluently. Therefore, it was decided to place Nenets language study to the central part of the training program, along with journalism and camera work. Also entry-level indigenous journalists studied rhetoric, logic, culture and literature of the Nenets people, conducted practical trainings under the guidance of Russian teachers from Naryan-Mar, Rostov-on-Don, St. Petersburg, Samara: Evgeniya Kornilova, Andrey Kosov, Irina Evdokimova, Lubov Gapeeva, Irina Sukhoveeva, Vitaly Dedogrjuk. The workshop of Anastasiya Laptsui, Nenets multireel filmmaker from Finland attracted great interest of participants. The training program was completed by three-day workshop with Norwegian specialists: Bjarne Store-Jakobsen, journalist and at the same time Norwegian manager of the project, as well as Harry Johansen, print and radio journalist of NRK Sápmi, filmmaker. Norwegians have shared secrets of making TV stories, features of work in indigenous communities. As a result of the workshop, participants created two TV stories what have been shown on air of the NBC. The first story was dedicated to adoption of the Nenets Autonomous Okrug’s law about Nenets language, the second one is about the project "Voice of the tundra”.

Now, the participants are in their settlements, where correspondent’s offices will start work soon. Equipment for them (cameras, editing stations, furniture and computers) has already ordered and will soon arrive to the Okrug. Offices will make news in the Nenets and Russian, which will be broadcasted on the satellite channel "Sever", owned by the Nenets broadcasting company. The channel is a part of the television channels package "Tricolor TV". It is the Russian largest satellite TV operator, broadcasting for most of Russia, including all territory of the Nenets Autonomous Okrug. The Nenets news will be available not only in the Nenets Autonomous Okrug, but also in the Arkhangelsk Oblast.

It should be noted, the project has contributed to the creation of 11 new working places. All 11 project participants became employed correspondents and cameramen in the Nenets broadcasting company. The Nenets Autonomous Okrug supported the project and provided funds in size of 1200000 NOK to the NBC for the establishment and operation of the Nenets broadcasting unit, training programs, equipment purchase. The Norwegian side represented by the Foreign Ministry of Norway and the Norwegian Barents Secretariat will finance training of project participants in Norway. The Canadian partners allocate funds for such trip to Canada.

The project has big plans for future. In March, young Nenets journalists will have training in Naryan-Mar from Canadian coaches and weekly training at the NRK Sápmi in Karasjok, Norway. In the second half of this year it will be a trip to Canada to learn experience of the Aboriginal Voices Radio Network and trip to the Indigenous people program Department of the Yamal-Region broadcasting company in the Yamal-Nenets Autonomous Okrug. And the most important is to organize regular Nenets news and program production and may be exchange with other world indigenous broadcasters.