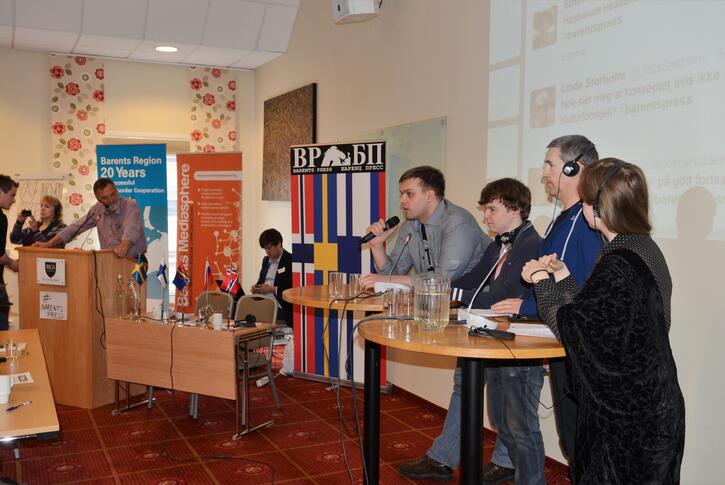 Barents Press is probably as important as it is unique. It serves as one of the only of its kind in Europe, as a purely voluntarily institution, stretching trough a vast and differential territory in the high north.

Barents Press came about in the aftermath of the 1993 Kirkenes declaration, as a result of a series of Bilateral Journalist seminars between Russia and Norway. After some initial meetings between the parts, someone raised the idea of inviting also others, like the Finns and later on the Swedes as well.   ­­

The network started to take shape in March 1994, when deciding on the name as well as the main principles. It was created as an open forum for journalists, to develop contacts and networks between the journalists working in the Barents Region, as well as arranging its own seminars for journalists.  The loosely managed organisation had their first grand meeting in 1995 in Saariselkä, Finland, and this is for many seen as the start-up meeting for the organisation. This kind of mass networking-meetings have been a yearly event ever since, and is important in the process of networking and discussing matters throughout the region. Through the years, hundreds of journalists from the Barents Region have now attended some sort of Barents Press activity, and thereby got the chance to get new impulses from the rest of the region.

Morten Ruud, now Director in NRK Finnmark, first encountered with Barents Press almost 20 years ago, and he believes the network is of great importance because of its status as an arena where people can meet. With an area consisting of almost 1/5 of Europe there are certain difficulties of seeing each other. Barents Press works like a good meeting point for this, to get to know people, to create a network. For this is what Barents Press actually is – a network. The fact that its not working as a official organisasition, has shown itself fruitful in some situations, like in the current situation with the Foreign Agent law. The idea behind Barents Press, put simply, is to make cross border cooperation among journalists easier in the Barents region. The network is based on four loosely tied national networks, with quit different types of organizational models. But what is common, is their national boards, and what’s linking them up, is the international board with a rotating presidency among the member countries. The network is of great help, helping journalists with contacts and information across the borders.

One that agrees with Mr Ruud, that the networking and the meetings is the importance of the Barents Press, is Tim Anderson, Leader of Barents Press Sweden. 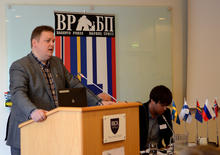 According to Tim, Barents Press works as an Educational Centre for new journalists on Barents questions, trough events, journeys and lectures. As he clearly states, we do everything to broaden the interests, the more who examines the Barents Region – the better. Anna Kireeva, this years International Chairperson and Russias BP Chairperson, agrees with Tim – “The aim of the BP is to assist cooperation, understanding and joint work for the journalists of the Barents Region”.  As Anna explains, for Russian journalists, and certainly for herself also, Barents Press is a uniqe opurtunity to learn and share experiences with other Barents journalists. They get extended knowledge about their Barents neighbours, trough visits in the region, discussions and debates on various topics, and as a result we end up with everyone understanding each other a little better. For example, Barents Press Norway have since 2012 arranged a series of courses for they who are interested. Morten Ruud explains us that the first course was organized in connection with the upcoming Presidential election in Russia, mainly to teach Norwegian journalists how Russians define Democracy, and what differences there are. The next one to be organized now, is going to look at the sensitive case of the Norwegian Child Protection Services, but this time aiming more towards Russian journalists. “We try to look at the things that are relevant for us in the north. Its here in the North that we are in contact with Russians on a daily basis. Its important that we take control over it, to create a sensible debate on social affairs”. Morten underlines that they are developing the civil society in both Russia and Norway.

We remove many myths and prejudice on both sides. Fact based debates and dissemination are key tools. Creation of myths are dangerous, especially in these times where there are elements of cold war on the rhetorical level, and in the same time a reduction of cooperation on the official level. Its important to hold all channels open.

Even though the organization is not working as a Labour Union, the organization have been expressing opinions on specific political matters. There are several topics which have been illuminated, topics ranging from the disagreements on Western- Russian sanctions, also leading to sanctions of journalists.

As with everything, and as for the Barents Region itself, things do change. Barents Press is also evolving, and according to Tim Anderson, there are allot of exiting changes going on at the moment. Some because there is new persons in important positions, some because of an higher interest for the Barents Region in general. He hopes that the cooperation in Barents Press will be stronger, hopefully with more solidarity and stability. “Barents Press will continue to be important in the future, but to what extent is still to be seen.

According to the long active Finish member of the network, Timo Sipola, the most important fact about this network is that it actually exists. At the time of its creation, borders were much more open and journalism was pretty much same thing in all these four countries. Timo says it wouldn’t be as easy to build this kind of network in todays polarized situation. But still it happened, and now we have a fruitful network and co-operation in many levels.

Timo have worked in Finnish media for a long time, and remember working with the Soviet Union, long before there was something called Barents Journalism or Press. At that time, it was something completely ells, but during the 1990s things were changing.  He remembers being in Kirkenes during the January 1993 signing of the Kirkenes declaration. The atmosphere was open, enthusiastic and the hopes for a better future was strong. In the beginning the concerns were more about environment, especially the huge environmental effects the intensive industrial activity on the Kola Peninsula had caused for the nature. There were many environmentalists demonstrating for the better environment in Kirkenes, but at the same time there was strong trust that by Barents co-operation we could solve these problems together. And there was absolutely no Media War. It became possibly to a more normal co-operation between journalists, and never has the journalism been based more on same values both in the east and the west.

But now after more than 23 years later, Timo tells that the situation is again changing for the worse After various kind of changes in society and among journalists both in the east and in the west, and especially after what happened in Crimea and Ukraine, we are not in the same kind of situation as the 90s any more.

Happily, we have Barents Press, where we still can guard and ventilate journalistic matters, also difficult matters, journalists from all Barents countries together.